Posted by paul@kronerdesign.com on May 6, 2012 in Branding, Community | No Comments 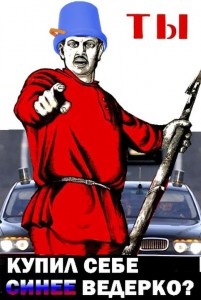 I love a good grassroots branding story as much as the next guy. Recently I heard a piece on NPR about a group in Russia called the Blue Bucket Brigade that caught my ear.

The story was about a retired cop in Moscow who got fed up with the abuse of one of the most hated symbols of the  privileged in Moscow: The flashing blue siren, or migalka, which empowers the owner to disregard traffic regulations that everyone else has to obey, and in the process endangering everyone else in the turn. Migalka abusers routinely drive down the wrong side of the street at alarming speeds with little regard for the safety of pedestrians or other drivers. So in protest, Alexei Dozorov, who heads the Moscow branch of the Committee to Protect Drivers’ Rights, taped a blue child’s bucket on the roof of his car and ignited a popular revolt against the arrogance of state officials, or those with connection and who can afford the £30,000 bribe to acquire a migalka.

These spunky protestors call themselves the “Blue Bucket Brigade” and have held protest throughout Russia, one of the most co-ordinated exhibitions of public anger seen in Russia in recent years. Hundreds of cars with blue buckets taped to their roofs paraded through Moscow and other cities demanding the abolition of Russia’s most hated emblem of official privilege and corruption. They have become quite a pain in the “задница” to the ruling elite.

Mr. Dozorov’s courage, and his effort to motivate citizens to protest through a consistent use of a simple but powerful brand symbol: A blue bucket. In response to the protests, Russia’s traffic police chief has pledged to investigate illegal migalki amid rumors that businessmen have bought the lights from corrupt officers. Excellent work Comrade Dozorov! -PK 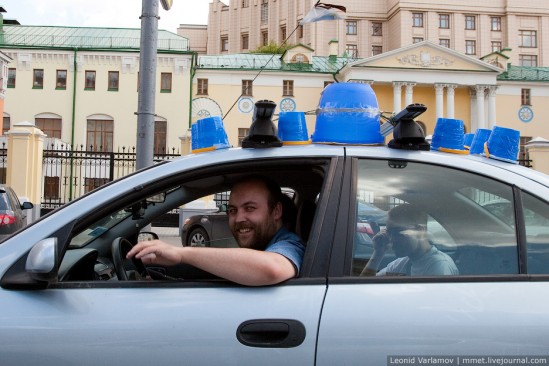